Received this in my inbox the day after the race:

On to the race recap.  I am fortunate enough to have an aunt that lives on the Baystate Marathon race route, which is part of the reason I chose it.  The other were the claims of "Flat and Fast" and 25% of race participants qualify for Boston (on average).  That was enough to get my butt out there.

Hubby and girls dropped me off to meet my Aunt Kathy Saturday afternoon and her and I headed to down to Lowell to pick up my number and attend the expo.  The expo was held at the Lowell High School Auditorium.  It was quick and easy to pick up my number and shirt.  The expo was pretty small with no impressive free samples or anything so we didn't spend long there.  I did pick up a pair of arm Asics arm warmers because I didn't want to have to wear a jacket/long sleeves to start the race.  A quick stop at the supermarket and liquor store (come on that's normal race prep right?) and we were headed back to her house for a quiet evening before the race.

I headed to bed a little before 10, which is actually on the late side for me (yup old lady status over here) and slept a lot better than expected.  I was up and showered and eating breakfast by 5:30am.  I opted for a Smores Luna bar and a banana.  I had never eaten this before a run/race before.  I know you are not supposed to try anything new on race day.  I DID NOT listen to this advice for this particular race.  I got lucky and I do not recommend you follow my example.  I also took Immodium AD before the race and I have never tried that before either.  Oh and hubby bought me a new Nike running skirt the day before the race that was just way too cute not to wear.  Oh and used fuel during the race that I hadn't used during this particular training.  So what that's like 4 new things on race day? (don't worry I had my 6 y/o do the math for me)  Hey I least I didn't try new sneakers....

Anyways, the race website recommended you get there 90 minutes before start time because traffic could be backed up, so I figured we'd head out at about 6:45am for an 8am start time. We were already in town and if there was traffic it wouldn't be too far of a walk to the start line.  Traffic was non existent and she was able to drop me off right near the start line.  I went right inside and waited in line for the bathroom.  Then when that was done I went outside and waited for the bathroom.  Notice a trend?  I always have to pee while I'm running and I figured since I had so much time I'd just spend it in bathroom lines.  They were long, but if you were there as early as recommended it shouldn't have been a problem.

Even though I waited until about 5 minutes before race time to get into my corral I had no issue getting there.  I had scoped it out before hand and had seen the fence had a bunch of openings to get through.   I lined up in the 8 min/mile and immediately spotted the 3:30 pacer, he was holding a sign and wearing a bright orange shirt so it wasn't really hard.  It was my plan to stay with him during the race.  The race was pretty big, around 3000 all together I think.  The marathon and half marathon started at the same time, but had different start lines to make up for the .1 difference at the finish line.  They had a moment of silence for Boston, and the National Anthem was sung, and the race started right on time.  I didn't have any trouble getting stuck behind people at the start, but it was pretty crowded until around mile 3 when the half marathon course splits off from the marathon course.

We all settled in and had a pretty big group running with the 3:30 pacer.  I really enjoyed it, there were a lot of conversations going on through out much of the race and it made time go by a lot faster.  The pacer (Ernesto) was great.  He let us all know at the beginning that he was planning to run about even splits and bring us in just under 3:30. (which he did, only I was slightly behind...more on that later).  After we split from the half marathoners we were onto the point of the race which we would be doing twice because the race is primarily a double loop.  The race is really pretty, much of it is along the Merrimack River and this time of year is peak foliage.  There are some small hills during the double loop.  I think this surprised some people because I heard a few complaints about how the race was supposed to be flat.  It really was mostly flat and I actually liked having it broken up with a few small hills.

The race support was great along the course.  There were water stops every 2 miles which also offered Gatorade, as well as clocks every 2 miles.  There was also Powerbar Gel at 2 stops on the marathon course.  I chose to carry my own Shotbloks. I loved having the clocks, even though I didn't have to worry about my pace at all. Thanks again Ernesto!  I felt great and I got to see family 4 different times and at the finish line.  This was such great motivation for me.  My stepsister was at about mile 2 (she had also visited me at the start). My hubby, aunt, and girls were at mile 12 and at that point I handed over my arm warmers and grabbed another pack of shot blocks and some more Imodium from hubby(I had major tummy troubles in my first marathon and I didn't want a repeat).  I knew they would be at mile 12, but they also surprised me at about mile 19 before they headed over to the finish line.  This was a great surprise!  They were able to do this because only the roads were not closed during the race.  My mom and stepfather were at 23.  I am really fortunate and so thankful for all of the support I had.

Ernesto (the pace group leader) was really encouraging during the last part of the race.  He kept reminding us that even if it hurt we could still keep going.  It was working for me until about mile 24.  I feel like I fell apart after that.  I fell back from the pace group, and stopped a couple times to stretch for a second and that just will my legs to keep moving.  I knew the finish line had to be close after a while, but I just felt like I would never make it.  At about a 1/4 mile to go hubby ran over to me with my daughter on his shoulders and just encouraged me to keep moving.  This really helped.  Although it was still hard, and I'm not sure I was even able to pick it up much to make it across the finish line.  I was so happy to see that finish line and see that I was going to reach a goal of been chasing for a couple years!

Family was diverted a different way around the building after the finish line than runners due to security reasons, so I made my way slowly around the building stopping to scan my bib to find out my chip time (loved this) and looking for food and drinks.  They had bananas, chips, Powerbars, soup, and PB&J sandwiches for food.  Water and soda for drinks.  I grabbed a water and that's it.  Maybe I'm just picky but none of that sounded good to me at the time.

I would definitely recommend this race.  It is well organized, has great support and a beautiful fast course.  The only thing I would have liked was a little more food options at the end.  This really wasn't a huge deal since I wasn't hanging out for long after anyways.

I was trying to upload a photo of the bling, but its taking to long so I'll add that in my next post along with some talk about all the new things I did on race day (and why) and those last 2 terrible miles!

Do you have a favorite race?
Posted by Erin@gosupermamago at 5:41 AM 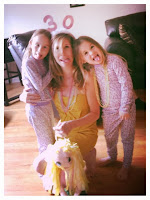 Run To Remember Half Marathon

Erin@gosupermamago
NH
I am a 30 year old stay at home mom of 2 little girls. Devin is 6 and Cori is 4. They are the best (its possible I am biased). My (future) hubby Shawn and I have been together for more than 8 years. He's the best too.(biased again) I have a Bachelor's in Business. I am a Certified Personal Trainer. I love to run. I love to eat healthy. I also love to drink wine and eat dark chocolate. Stay tuned to learn more!